AI Leaves a Big Tip for the Restaurant Industry

By Brendan Hickey, Director of Sales

Restaurant owners have a lot of ways to lose money. Bad weather, spoilage, theft and the fickle nature of public tastes can grind the toughest restaurant operators into dust. However, empty tables won’t cost you nearly as much as losing your employees. Employee turnover remains one of the top ways that restaurants are losing money. The Center for Hospitality Research at Cornell estimates that the cost of employee turnover averages around $5,864 per person for a typical front-line employee.

Meanwhile, one lost waitress or bartender requires between $50K and 100K of sales to make up for the difference. Most full-service restaurants have a tiny profit margin that falls between 3-and-5 percent. Fast food restaurants generally have a higher profit margin than full-service restaurants. The tendency to use frozen, bulk foods along with higher customer turnovers leads to an average margin of 6.1-to-9 percent. Either way, that’s a lot of burgers and beers for break-even.

The Real Cost of Losing a Single Employee

The Cornell study broke that number down even further. Here’s how they got to $5,864:

Given the academic nature of the study, some of the more hard boiled numbers crunchers may have difficulty with the “soft costs” of productivity and pre-departure losses. And training varies from restaurant to restaurant. $1900 per employee in sourcing, screening, hiring and retaining may seem more accurate to daily practitioners.

Why is Turnover So Prevalent in Restaurants?

The turnover rate in the hospitality sector topped 70 percent for the second consecutive year in 2017 but still remained below pre-recession levels of 80%, according to the NRA’s Chief Economist Bruce Grindy. It represented the sixth consecutive annual increase, after falling to a cyclical low of 56.4 percent in 2010. In comparison, the average turnover rate for all private sector workers stood at 46.1 percent in 2016, up nearly six percentage points from the 2010 low but still below the average turnover rate of 50 percent during the 2002 – 2006 period.

Going by the numbers, a restaurant with 30 employees can expect to spend about $40,000 on recruiting for turnover on an annual basis.

There are several key reasons why this happens

First, the restaurant industry is the economy’s largest employer of teenagers, as one-third of all working teenagers in the U.S. are employed in a restaurant, according to data from the Bureau of Labor Statistics. For most, this is their first job. Almost all will move on to other roles and careers.

Second, competition is fierce. When restaurant workers hear that people are making one dollar an hour more money at another establishment, it’s easy for them to jump ship and get hired somewhere else. There is a vicious cycle taking place:  because turnover is such a big problem, most restaurants are usually hiring….thus creating more turnover.

Third, the restaurant industry employs a high proportion of students. Twenty-seven percent of eating and drinking place employees are enrolled in school, versus just 11 percent of the total U.S. employed labor force, according to the U.S. Census Bureau’s 2015 American Community Survey (ACS). In addition,  the restaurant industry is one of the economy’s largest creators of seasonal jobs during the summer months, adding more than 500,000 jobs during an average summer season.  Overall, 31 percent of the eating and drinking place workforce are part-year employees, compared to 18 percent of the total U.S. workforce, according to the ACS. So almost one third of your labor may exit the premises depending on the season or school year.

Many people in the bar and restaurant business know the meaning of running a “tight door”. Your discerning hosts and bouncers allow in only a highly curated subset of diners. The word of mouth advertising from “the fabulous people” makes the “dinner and a show” crowd appear in force. The line outside the door attracts street traffic and generates the all important “buzz” of a successful operation. Ideally, good restaurant operators don’t want MORE applications. The easier it is to apply, means a greater percentage of unsuitable applicants. Meanwhile successful candidates are  differentiated by more than words and appropriately “checked” boxes . Restaurants need to see personality, cultural fit, work ethic, character, presentation skills and attention to detail. They also need to be in position to take advantage of their youthful applicant pool who are more willing than their predecessors to make immediate decisions and seek instant feedback due to their comfort with mobile technology.

Since your employees should reflect your brand, AllyO is helping companies approach employee candidates with screening questions that help candidates express their true level of engagement. While documented citizenship, access to a working vehicle and the ability to lift 50lbs or stand for 8 hours are required questions for almost every restaurant role, Ally allows for a more holistic approach. Consider asking free form questions such as:

1. Why do you want to work in the food and beverage industry?

2. What does “hospitality” mean to you?

3. Tell me about your most memorable dining experience.

Perhaps ask a candidate to video themselves and upload the recorded answer to the following question:

If a customer presents you with a coupon that is clearly expired, how would you handle that?

Imagine if a candidate walked into your restaurant, and saw a sign that said “HELP WANTED” Text “JOBS” to (*&^) – 545- **** and was presented with these questions. Or imagine a candidate coming to your online careers page and being asked to upload a video…….

If you’d like these answers to be at your fingertips before every interview, you may want to learn more about AllyO!

AllyO is an AI technology company founded a simple mission – make recruiting delightful and efficient for everyone. It addresses the traditional inefficiencies of lost applicants and conversions due to poor candidate experience, high cost of recruiting due to overburdening of menial tasks on hiring teams, and lack of visibility and control for HR leadership. It utilizes deep workflow conversational AI to fully automate end to end recruiting workflow by intelligently engaging via texting over mobile and web. AllyO is used by Fortune 500 enterprises that have experienced 2-6X increase in applicant capture and conversion rate, 91% application completion rate, and over 50% reduction in cost and time to hire. AllyO is backed by leading investors such as Google, Randstad, Bain Capital Ventures and Cervin Ventures. 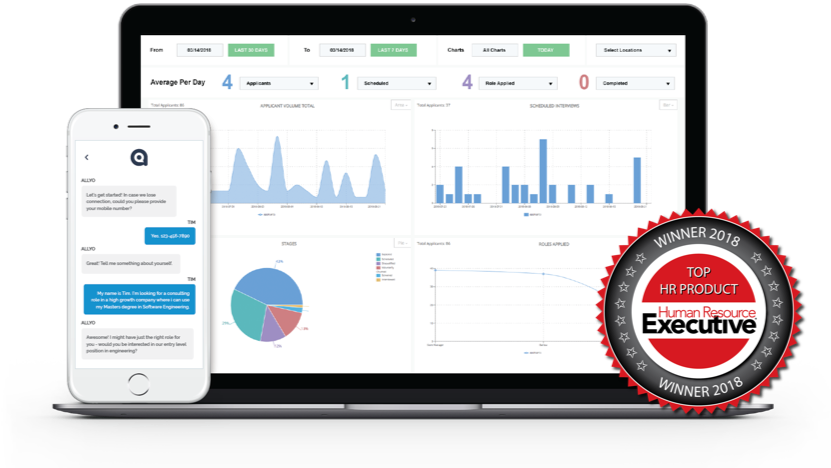